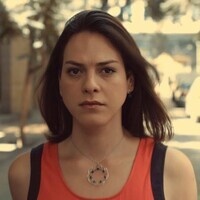 "A Fantastic Woman" is a 2017 Chilean drama film directed by Sebastián Lelio. Marina is a transgender woman living in Santiago, Chile, who works as a singer and waitress. She is taken to dinner by her older boyfriend Orlando, who wakes up in a daze in the middle of the night and complains he does not feel right. As Marina prepares to take him to the hospital, he stumbles down a flight of stairs. After driving and checking Orlando in the hospital, she is told by a doctor that he has died of a brain aneurysm. She runs from the hospital and is then picked up by police. This film was selected as the Chilean entry for the Best Foreign Language Film where it won in the 90th Academy Awards.