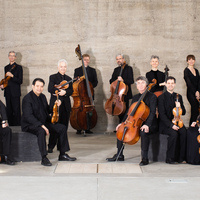 The Academy of St Martin in the Fields is one of the world’s finest chamber orchestras, celebrated for fresh, brilliant interpretations of the greatest orchestral music. The Academy is currently led by music director and virtuoso violinist Joshua Bell. With more than 500 releases in a much-praised discography and extensive international touring, the Academy is well-known and loved by audiences throughout the world. The ensemble is also famed for recording the soundtrack for the multiple Oscar-winning film Amadeus with its founder Sir Neville Marriner in 1984.

In this special concert, the Academy will be joined by Gary Hoffman, one of the outstanding cellists of our time, combining instrumental mastery, great beauty of sound, and a poetic sensibility in his distinctive and memorable performances. Mr. Hoffman gained international renown upon his victory as the first North American to win the Rostropovich International Competition in Paris in 1986.

Joshua Bell is not appearing with the orchestra on this tour.

This performance is presented by the Charlotte Concerts Legacy Fund.

Special thanks to WDAV Classical Radio for their promotional support of this program.