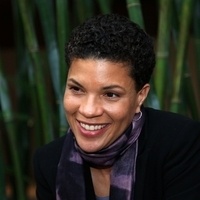 A Conversation with Michelle Alexander

Michelle Alexander is a legal scholar, social justice advocate, New York Times columnist and visiting professor at Union Theological Seminary. She will lead a conversation on ending racial caste in America while providing a new perspective on the challenges facing the civil rights community and a call-to-action for a multi-racial, multi-ethnic human rights movement for justice in America. The conversation will be moderated by Michael Barbaro, host of The New York Times' "The Daily" podcast.

In her acclaimed best-seller, The New Jim Crow: Mass Incarceration in the Age of Colorblindness, which is Queens' 2019 Common Read, Michelle Alexander peels back the curtain on system racism in the American prison system. The New York Review of Books described her work as "striking in the intelligence of her ideas, her powers of summary and the force of her writing." With equal force and candor, she breaks the silence about racial injustice in the modern legal system to reveal how mass incarceration has come to replace segregation. Alexander's work not only explores the myth surrounding our criminal justice system from a racial and ethical standpoint, but also offers solutions for combating this epidemic.

Presented to the Community by: Wells Fargo