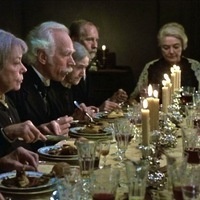 "Babbette’s Feast" is a 1987 Danish drama film directed by Gabriel Axel. The elderly and pious Protestant sisters Martine and Philippa live in a small village on the remote western coast of Jutland in 19th-century Denmark.

Their father was a pastor who founded his own Pietistic conventicle. With their father now dead and the austere sect drawing no new converts, the aging sisters preside over a dwindling congregation of white-haired believers.  The story flashes back 49 years, showing the sisters in their youth.

The beautiful girls have many suitors, but their father rejects them all, and indeed derides marriage. Both sisters reject several courtships and instead decide to stay with their father and spurn any life away from Jutland.