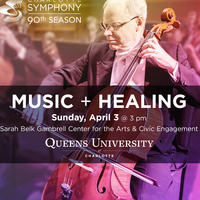 Music is the universal language, uniting humanity in a shared mental and emotional connection. Throughout history, people have understood music's innate ability to heal. In the Charlotte Symphony's debut performance at Sandra Levine Theatre, experience a range of musical selections written about challenging topics with the hope for healing.

Christopher James Lees leads the performance, featuring Cellist Alan Black soloing on the orchestral premiere of Mark Leonard Lewis' "I Will Wade Out," a work that reflects on the universal human experience as we work toward collective healing.

"For me, the work is meant to encapsulate triumph over adversity, to stir the spirits of fortitude, to swim out of the depths of despair, yet to realize one has always been on a path to awakening." ~ Mark Leonard Lewis

Please note: This performance will not have an intermission.