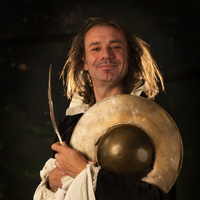 This is a special commissioned piece exclusive for the 5th annual El Quixote Festival. Among the many presentations of Lope, he will be performing a re-imagined conversation between Lope & Cervantes. He will also perform some of Quevedo, Luis de Góngora and many others. It promises to be a spectacular presentation.

Some 20 years ago Crispin d’Olot, old-fashioned troubadour, started performing in theaters, schools and plazas of Spain, Europe and Latin America. This theatrical, poetic and musical adventure was a response which this literary “jongleur” found utilizing classical literature as a tool to reconstruct cultural imaginary essential to a society increasingly marked by violence and the inability to meet on common points of identity and values. Crispin d’Olot is considered a necessary cultural reference and he has been blessed with great successes on television especially in prime time where the format has helped him promote his artistic quality.