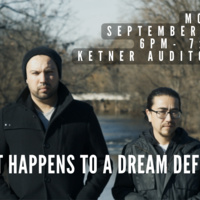 DACA Film Screening: "What Happens to a Dream Deferred"

“What Happens to a Dream Deferred” is an intimate portrait of a day in the life of two Deferred Action for Childhood Arrivals (DACA) recipients who were pursuing their graduate degrees when their lives were thrown into limbo after the DACA program was rescinded on Sept 5, 2017. Join us for a viewing and discussion of a short film portraying the stories of these two DACA recipients as we commemorate Hispanic Heritage Month and the 10 year anniversary of DACA. We will be joined in-person by one of the DACA recipients and virtually by the film’s Director, Scott Boehm to share their thoughts about the film. Snacks will be served.