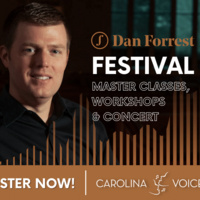 Dan Forrest is one of the most well-known and respected choral composers working today; his music is frequently performed in schools, universities and churches. This festival brings him to Charlotte for the first time to share his music with choirs from across Charlotte. Choirs will work with Dan on his compositions and also attend masterclasses on topics such as compositional technique, text selection, choral preparation, and others. The two-day event will end with a gala concert featuring five choirs performing separately and as a mass ensemble.