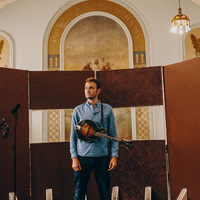 An Evening with Chris Thile

Acclaimed by NPR as a “genre-defying musical genius,” Grammy Award-winner and MacArthur Fellow Chris Thile has built an impressive career as a musician, singer, songwriter and radio personality. Thile is a founding member of the bands Nickel Creek, which he created at a very young age with bandmates Sean and Sara Watkins, and Punch Brothers, whose recordings include the Grammy-winning album “All Ashore.” For four years, he hosted the popular public radio program “Live from Here” (formerly known as “A Prairie Home Companion”). Over the years, he has collaborated with award-winning cellist Yo-Yo Ma, renowned bassist Edgar Meyer, jazz pianist Brad Mehldau and acclaimed banjo player Béla Fleck, among others.

His latest recording, “Laysongs,” is his first truly solo effort; the album is just Thile, his voice and his mandolin, performing six original and three cover songs, all of which contextualize and banter with his ideas about spirituality. Similarly, this performance will showcase his strengths and musicianship as a solo performer.