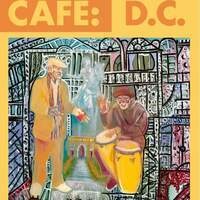 Honoring the Diaspora: Poetry and Discussion with Jeffrey Banks and Maritza Rivera

Maritza Rivera is a Puerto Rican poet and Army veteran who resides in Rockville, MD and San Juan, PR. She has been writing poetry for over fifty years and is the creator of a short form of poetry called Blackjack. Maritza is the author of About You; A Mother’s War; Baker’s Dozen; Twenty-One: Blackjack Poems and the Blackjack Poetry Playing Cards. Since 2011, she hosts the Mariposa Poetry Retreat and the Mariposa Reunion Reading. Her work appears in literary magazines, online publications and public arts projects.

Jeffrey Banks is poetically known as "Big Homey". He's been the opening act for America’s Got Talent Champion, Brandon Leake. He’s been featured in national media such as ESSENCE Magazine, Sirius/XM Satellite Radio, Radio-One Inc., the CBS Early Show and BLACK ENTERPRISE Magazine. Big Homey's album, Exposed-The EP, is the poetic testimonial of the trials & victories of a Christian Believer. Over the Pandemic, he’s been published in numerous Day Eight poetry anthologies including Falling Leaves: An Interfaith Anthology on the Topic of Consolation and Loss. This led to him being selected to have his poetry being selected for District of Columbia Public Schools curriculum in the publication, DC Poets for DC Schools. He became a poetry editor for Bourgeon Magazine and co-edited the recent anthology, The Great World of Days. His work has also been published by the National Association for Poetry Therapy, District of Columbia Public Libraries and the international poetry magazine, Paris Lit Up. He's performed nationwide including speaking at over 30 college campuses across the country. He’s written numerous funded grant proposals to advance his event planning and artistry. This includes being a Teaching Artist Fellow and a Lead Teaching Artist with the DC Arts & Humanities Education Collaborative. He facilitated summer writing camps and led poetry workshops for secondary school students in DC, Maryland and New York City. He’s produced poetry anthology, Diaspora Café: D.C. as the lead editor with Maritza Rivera and was a 2022 Larry Neal Writers Award Nominee for the DC Mayor’s Arts Awards. He’s done numerous features at the Busboys & Poets franchise and currently is a finalist for their Cuba trip to the 31st International Book Fair in Havana, Cuba.

There is no charge, but reservations are required. Reserve your seat now!