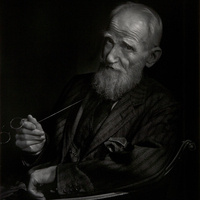 Influence and Identity: Twentieth Century Portrait Photography from the Bank of America Collection

Influence and Identity features the works of international
photographers from the early through the mid-twentieth
century, a period often called the golden age of
portrait photography. The exhibition includes works by
master portraitists such as Antony Armstrong-Jones,
Richard Avedon and Yousuf Karsh, as well as renowned
photographers Berenice Abbot, Ansel Adams, and Garry
Winogrand. Using photography, a medium born of the
modern era, these artists produced images that capture
the commanding personalities of celebrated figures in
popular culture, politics and the arts.

This exhibition has been loaned through the
Bank of America Art in our Communities® program.