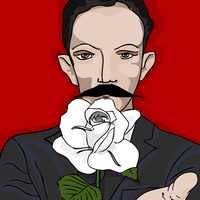 Enjoy a night of original short stories, poems and prose inspired by themes and topics explored in the works of José Martí, one of Cuba’s most intellectual and literary figures. In celebration of the 165th Anniversary of Martí’s birth, this event is also part of the 4th edition of the El Quijote Festival – Noche Bohemia.

Sponsored by Queens Everett Library, the Center for Latino Studies and the World Languages Department in partnership with the 4th Annual El Quixote Festival.

Admission is free and open to the public.