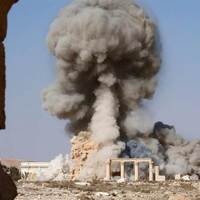 Arts at Queens and the Greenspon Center for Peace and Social Justice present The Destruction of Memory (2016), directed and written by acclaimed filmmaker Tim Slade. Based on the book by Robert Bevan, The Destruction of Memory: Architecture at War, Slade’s film looks at the urgent issue of cultural destruction. It includes interviews with the former Director-General of UNESCO and the Prosecutor of the International Criminal Court.