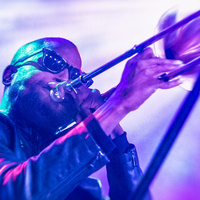 New Orleans native Troy Andrews – known as Trombone Shorty – has no absence of accomplishments in his lifetime. He has performed at the White House five times; played the Grammys multiple times; opened tours for Red Hot Chili Peppers, Lenny Kravitz and the Foo Fighters; voiced the iconic sound of the adult characters in The Peanuts Movie; earned the coveted closing set at the New Orleans Jazz & Heritage Festival and released two highly-praised children’s books.

His most recent release, Parking Lot Symphony, released on Blue Note Records, explores a diverse musical cross-section from soulful, groovy R&B to brassy funk and demonstrates his multi-talented artistry. For this Spotlight Series performance, Trombone Shorty will be joined by his longtime band Orleans Avenue.