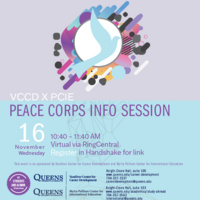 Learn from the regional Peace Corps, as well as Queens alumni who have participated in the Peace Corps, about experiences and opportunities. Presented by Vandiver Center for Career Development and Pulliam Center for International Education. Sign-up for an individual meeting with the Peace Corps recruiter from 12:00 – 4:00pm in Knight-Crane Hall, suite 105. RSVP in Handshake.

Sign up to talk to a Peace Corps recruiter about applying in Knight-Crane, Suite 105 from 12noon-4pm.

Guest include:
Sierra Plato
NC Peace Corps Recruiter
Sierra Plato is a Raleigh, NC native and returned Peace Corps Volunteer who served in the Afro-Caribbean part of Costa Rica called Limón from 2016-18. As an English teacher and trainer, her notable projects include an English summer camp for a high school, and planning/executing English festivals from the institutional to national levels. Since her Peace Corps service, she has continued working for the agency as the Senior Recruiter in North Carolina. She has a passion for service, women’s empowerment, and building cross-cultural connections.

Sarah Hawley '14
U.S EPA Peace Corps, 2014-2016, Tanzania, Njombe, East Africa
Sarah received her B.S. in Biology, with a concentration in animal sciences, from Queens University of Charlotte in 2014. During her undergraduate career, Sarah was a four-year member of the Women’s Soccer team and the Tri-Beta Biological Honor Society. Sarah joined the U.S. EPA in January 2017. She works in the Chemical Safety Section within the Redevelopment and Chemicals Branch in the Land, Chemicals & Redevelopment Division (LCRD). In this role, she is the Region 4 Contact for the Lead-based Paint Program, the lead for the section’s Training Provider Program, the State Contact for three of Region 4’s eight states and the Tribal Coordinator/Project Officer for the region’s six federally recognized Tribes. Additionally, Sarah oversees management of the grants for both the Lead-based Paint and Asbestos Hazard Emergency Response Act (AHERA) programs for two states.