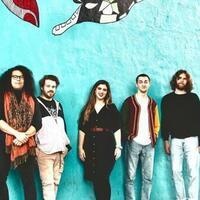 DICE and the Center for Latino Studies invite you to a Women’s History Month concert with Queens Alumnus Songwriter & performer Florencia Rusiñol (class of 2015) and her band, Florencia & the Feeling.

Florencia Rusiñol is a Latin American singer & songwriter who grew up in East Tennessee. Her musical style is influenced by her Argentinian roots and her jazz-singing background and is combined with her love of pop and funk music. After attending Queens University of Charlotte for her Music Therapy degree, she moved to Ecuador where she worked as a music therapist, music teacher, and produced her first EP, available on all streaming platforms.

The Feeling is the name given to the group of incredibly talented musicians that have been touring the Southeast with Florencia for the last year. The name refers to the captivating & carefree energy that flows from the stage at each and every concert.

Join them for this free concert open to the Queens and Charlotte community on Thursday, March 24th at 7:00 pm in the Kathryn Greenhoot Recital Hall in the Sarah Belk Gambrell Center on the campus of Queens University of Charlotte.